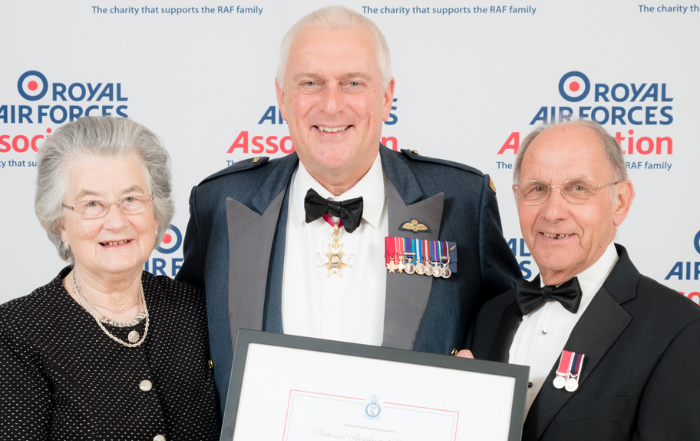 Two RAF Association caseworkers have been recognised for their unstinting support for the RAF community at the RAF Benevolent Fund’s annual awards.

Honorary Welfare Officers Pip Iles of Basingstoke Branch and Ron Simpson of Norwich Branch were named as two of the three finalists in the Welfare Caseworker of the Year category, alongside Roger Woodward of SSAFA East Dorset.

At a ceremony at Plaisterers’ Hall in London attended by hundreds of RAF personnel, veterans, and supporters of the Fund, Pip Iles was revealed as the overall winner. His citation highlighted his dedication as a caseworker for more than a decade in the Basingstoke area. It described how he goes the extra mile to support beneficiaries and how he worked tirelessly through the pandemic so RAF veterans in the local community were not overlooked for welfare support.

At the same time, Mr Iles was supporting cases as far afield as Norwich and Southampton. Ron Simpson was celebrated for:

“Always putting the need of the beneficiary to the fore of casework, and accepting cases at short notice, many of which required urgent support and assistance.

During the whole of the pandemic he was very active, completing many contact telephone calls to enable support to still be delivered to members of the RAF family who needed support.”

Now in its 10th year, the RAF Benevolent Fund Awards acknowledge and celebrate the outstanding contributions of its fundraisers, volunteers, and partners.

“We would be unable to carry out our life-changing work without the significant support from these dedicated groups and individuals, so I’d like to extend my thanks and congratulations to every one of this year’s winners.”