The RAF Association is looking forward to seeing you at the following spectacular events.

The Midlands Air Festival returns for a fourth year of excellent family fun as we commemorate the Queen’s Platinum Jubilee!  This spectacular aviation

event will once again consist of Nightfire, Weekend Air Displays and Hot Air Balloon Launches! Plus there will be great trade stands, children’s rides and more entertainment than ever before!

With main flying displays on Friday and Saturday, there is a variety of aircraft for all audiences! From helicopters, high energy aerobatics, warbirds, aerial ballet and fast jets, the Midlands Air Festival has it all!

The full air display line up for the English Riviera Airshow has been revealed, with aerobatic teams, parachutists and classic aircraft joining the Red Arrows in a packed programme. The airshow takes place on June 4 and 5, with Paignton Green the base for the two-day spectacular.

The Blades display team top the latest list, which already includes the Battle of Britain Memorial Flight and the Chinook helicopter alongside the Red Arrows. Free-fallers from the Tigers Parachute Display Team and the Strikemaster classic jet will also be joined by the Pitts Special aerobatic biplane and two vintage Russian-built Yakovlev Yak 50s.

The Red Arrows will close the show on Saturday June 4 before taking off again on Sunday June 5 to open day two of the flying action. The free airshow, organised by Torbay Council with support from the English Riviera BID Company, is part of an extended four-day event for 2022 in celebration of Queen Elizabeth II’s Platinum Jubilee.

RAF Cosford Air Show will include an action-packed six-hour flying display, including powerful demonstrations of modern military aircraft from the Royal Air Force and international military partners. There will be captivating appearances from iconic vintage aircraft from throughout the history of aviation and adrenaline pumping aerobatic displays.  On the ground, there will be a huge assortment of aircraft on static display for you to view up close, including some which you will be able to sit inside.

See and experience the excitement of an air show with our four-hour crowd favourite line-up including:

The show will deliver a series of build-up attractions to truly promote civil / military integration and for the day have a full programme including parades, entertainment, flying displays and capability demonstrations to capture and build on public support for our armed forces community and raise awareness of the vital works done by the UK Armed Forces across the globe. This event will also demonstrate through very large public attendance the true resilience of the United Kingdom and our ability to recover confidence in hosting large public events in a safe and friendly environment at Cleethorpes.

The Ministry of Defence has confirmed that Scarborough will now host the prestigious Armed Forces Day National Event in 2022. National event attracts is expected to bring in a record attendance of 100,000+ visitors of all ages during the course of the weekend. It will have an action packed event programme, including spectacular air and ground displays and an extensive military parade. Previous national events have attracted people from across the country and beyond, including VIP guests such as members of the Royal family and the Prime Minister.

Featuring breathtaking aerobatic displays, state-of-the-art military aircraft and vintage planes from the past, tens of thousands of visitors enjoy the Wales Airshow in Swansea Bay every year. Expect to see exciting air displays, incredible ground displays, entertainment and much more

Confirmed for Southport Air Show so far are the RAF Red Arrows, RAF Typhoon, Battle of Britain MemorialFlight and the Turot Display Team.

The Royal International Air Tattoo is returning for 2022, better than ever! From 15-17 July, RAF Fairford will be buzzing with 170,000 excited visitors and the Cotswolds will echo once again with the thrilling sights and sounds of several hundred aircraft of all shapes and sizes, from all eras and countries of the world, gathering for this unique adrenalin-fuelled occasion.

Join us for a special celebration to mark the United States Air Force’s 75th Anniversary and help us look to the future with our operational theme ‘Training the Next Generation Air Force’.

The show will return for 2022 with some of the world’s finest military and civilian aircraft performing over the iconic seafront. To complement the aerial programme, there will be plenty to see and do on the ground with a wide range of stalls, attractions and food concessions in the Air Show Village on the Tower Festival Headland.

Join us over two days and enjoy thrilling flight displays and spectacular twilight flights (Thursday only) in the skies over Clacton’s stunning seafront as well as a host of ground events on the West Greensward!

The annual Rhyl Air Show takes place in the coastal resort of Rhyl in North Wales over a weekend in late August. The fun-packed program primarily focuses on demonstrating the UK’s aviation skills. Additionally, you can observe aircraft displays on the ground and enjoy other family-friendly activities. This spectacular event is an ideal place to farewell warm summer days.

Bournemouth will play host to the UK’s largest free, air festival. Expect amazing displays on land, in the air and on the water too.

In the air, on the ground, and even in the clothes you wear! The Battle of Britain Air Show returns to bring the 1940s to life. From vintage aviation and the stories of those who served at RAF Duxford, to living history groups and entertainment from the era. See historic Duxford come to life at one of the site’s best loved events of the year.

The aircraft at Goodwood Revival usually include wartime aircraft and around 30 pre-1966 aircraft on static display in the Freddie March Spirit of Aviation. 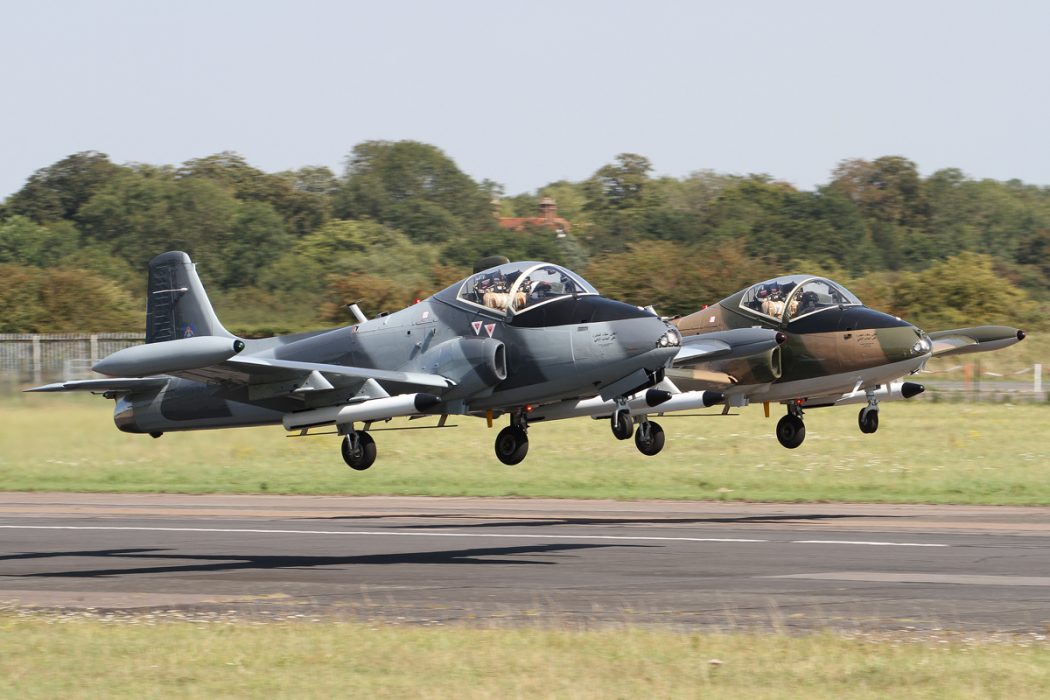 If you would like to show your support for the vital work of the RAF Association and aren’t able to come and see us at any of these airshows, you can visit our online shop and buy some fab Red Arrows and Display team merchandise using the button below!