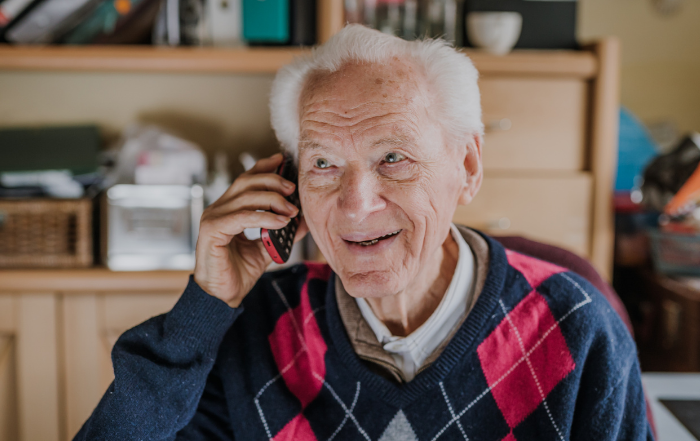 A telephone friendship group run by the Royal Air Forces Association is helping to reconnect members of the RAF veteran community across the UK.

The initiative, funded by the Armed Forces Covenant Fund Trust’s Tackling Loneliness programme, is primarily aimed at improving the wellbeing of veterans who used to visit the RAF Association’s respite hotels.

Many of the hotel guests were regulars who enjoyed meeting up with other veterans holidaying at the same time. Over the years, they became friends and looked forward to spending time together. However, the veterans no longer had a place to meet when the pandemic led to the closure of the Association’s Rothbury House hotel last year.

Mark Shields, the RAF Association’s Head of Community Support, said: “The pandemic lockdowns meant that many of these former hotel guests were feeling really isolated, so, thankfully, the Tackling Loneliness grant enabled us to swing quickly into action to provide friendship and support.”

The project, which is able to support up to 500 people nationally, brings veterans together for regular telephone and video calls led by a facilitator.

Among those benefitting is Edna, who used to enjoy holidaying at Rothbury House, Northumberland. She said: “Being able to get together in a group of like-minded people on the telephone means we can have a really good natter – just like we used to do at the hotel.”

Among the telephone facilitators is David Dick, the Scheme Co-ordinator for the Rothbury House site, which, after undergoing extensive renovation, is due to open next month as veterans’ retirement housing.

David (pictured) said: “People taking part in the calls include a group of women who used to visit Rothbury House together two or three times a year. They developed a strong friendship, and have fond memories of their times together playing dominoes and card games.

“The ladies were very disappointed when the pandemic ended their meetings, so it was fantastic to be able to offer them this telephone service. There’s always much fun and laughter when we get together on the calls, and there are opportunities for participants to share any day-to-day worries and to exchange helpful advice.”

The RAF Association offers a range of welfare services for serving and veteran RAF personnel and their dependants.

Loneliness affects tens of thousands of people across the RAF community. Whether it’s a veteran struggling to adapt to life after service, or a family member facing difficulties alone, loneliness can be devastating to people’s mental and physical health. Our volunteers are at the heart of the service as they provide one-to-one, personalised conversation, vital friendship and support via telephone and digital initiatives. The positive impact our volunteers have on the RAF community is huge and is shown through the wonderful responses from our beneficiaries.