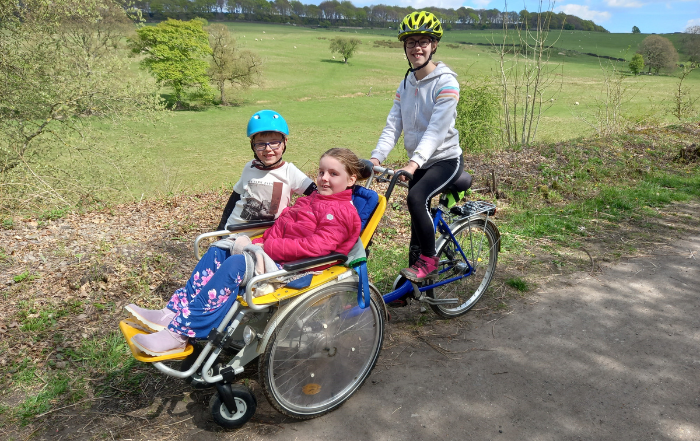 The Williams family from Penistone, near Sheffield, love doing things together, so it seemed only right that nine-year-old Molly Williams would join her dad in his fundraising challenge for the Royal Air Forces Association.

Molly Williams has spinal muscular atrophy (SMA), so despite not being able to walk, she is joining her dad Julian as he attempts to walk 100 miles in 24 hours. She will be taking part using her Duet Tandem Wheelchair bicycle, with the help of her mum May, sister Anya (11) and brother Edmund (7). They will complete 84 laps of the athletics track: one lap for every night Molly has spent in critical care.

The challenge will take place on Saturday 28 and Sunday 29 May, at the English Institute of Sport & Olympic Legacy Park, in Sheffield.

Talking of her condition, Molly said:

“SMA is a form of motor neurone disease, and I am a full-time wheelchair user. I know I will never walk, stand or even sit without support. I have already had two ten-hour surgeries at Sheffield Children’s Hospital. I have had my spine straightened with metal rods, both hips reconstructed and more emergency admissions than I can remember. Sometimes I need a special mask-and-air to help me breathe, and lots of other kit to get me through each day.”

As Julian served in the Royal Air Force, he was put in touch with the RAF Association back in 2014 when he and his wife May realised they needed extra support to afford the many adaptations they needed to their new house, as well as a wheelchair-accessible car for the family.

“Dad didn’t expect the incredible response and generosity we have received. The RAF Association has supported me in so many ways; including my first wheelchair-accessible vehicle, meaning I could go out in my chair for the first time beyond my home town. They also helped provide a specialist bath, which lowers me safely and comfortably into the water – which is lovely after all the pain of my surgeries. It is difficult to put into words, how grateful we are to the Association, and we want to give something back.”

“The support we’ve had is overwhelming, so hopefully we can all raise lots of money to help the Association be there for other families who need them. I’m confident I can complete the challenge, but a little nervous as I’ve never done anything like this before. I considered running a marathon, but lots of people do that, so I wanted to do something a bit different. The fact that we’re doing this as a family means we can support each other through the tough bits, just like we do every day.”

You can support the Williams family with their fundraising by visiting their JustGiving page.

To be told your young daughter doesn’t have the incurable degenerative disease doctors suspected would be a huge relief for any parent. This was the situation facing May and Julian Williams in early 2014, so they were devastated when further tests revealed their happy and otherwise healthy little girl did indeed have spinal muscular atrophy (SMA).

SMA, a form of motor neurone disease, is a genetic disease that causes muscle weakness and progressive loss of movement. It is caused by a deterioration in the nerve cells connecting the brain and spinal cord to the body’s muscles.

May and Julian, who served in the Royal Air Force as an engine mechanic, had a feeling something was amiss even before Molly was born. They already had one-year-old Anya and as May is a midwife, she knew what to expect from her pregnancy. Their second baby didn’t kick, but following a range of scans and tests, the couple were told there was nothing wrong. Molly was born and seemed healthy.

“When Molly was a few weeks old, we noticed that she didn’t move her legs like most babies do,” says May. “Despite GP and health visitor appointments, it wasn’t until we moved house and saw a new health visitor that things started to fall into place.

“I had just finished a night shift on the antenatal ward on 23 December 2013, when we took 14 month old Molly for an appointment with a consultant who ran a lot of tests and said he thought she had SMA, but couldn’t be sure.

“I was working that night too, so after just two hours’ sleep I went back in. I will never forget that horrific night. I read online that babies with the most severe type of SMA, type I, never develop the ability to sit unsupported and only five per cent live to see their second birthday.”

When the couple saw another specialist in February of 2014 he said he didn’t think Molly had SMA, which was an enormous relief. They had feared the worst and had been planning a funeral for their young daughter, even looking at coffins. Molly Williams was referred to a physiotherapist, who wasn’t happy with the diagnosis. May and Julian don’t know what she said to Molly’s consultant, but they were in front of him within two days.

More tests were in store for little Molly Williams, which confirmed the couple’s worst fears – Molly had type I SMA, the most severe form. They were back to funeral planning, not knowing how long they had left together. This was April 2014.

Molly turned two in October of that year and, SMA apart, was developing well. The family’s finances had taken a battering though, with May working extra shifts to pay for all the specialised equipment needed to care for a disabled child. She was staying up all day after night shifts to save on childcare costs. They were also having to move house to somewhere they could adapt for their new family needs.

This was when a friend of Julian’s suggested they contact the RAF Benevolent Fund to see what help could be provided. They were then put in touch with the RAF Association, which sent a volunteer welfare officer to see the family. Stuart made several visits to the Williams family to assess their needs and see the extent to which the charity could support them. Working in partnership with the Benevolent Fund, a support package was put in place. He is still in touch with the family, to make sure they have everything they need to make Molly’s life as easy and comfortable as it can be.

“We didn’t expect very much as we needed help for Molly, not Julian. We were astounded when we received a grant to pay the deposit for a new car that we could get Molly’s motorised wheelchair into. We have another child now, Edmund, so it’s nice that all three children can sit in the back together and squabble!”

The support didn’t stopped there. The couple’s new house was remodelled to give Molly Williams a bedroom and bathroom downstairs. This included her ‘flying bath’, which raises up to allow her to be bathed without May or Julian having to bend down. It also raises her out of the draining water, keeping her warm after bath time. This all means less pain for Molly, as water eases her discomfort.

Stuart has made sure, over the years, that if the Association can help the Williams family the help is provided as soon as possible.

Looking for a challenge that will help make a difference to the RAF community? Whether you choose running, walking, cycling or anything else, you’ll be supporting vulnerable people in our community.