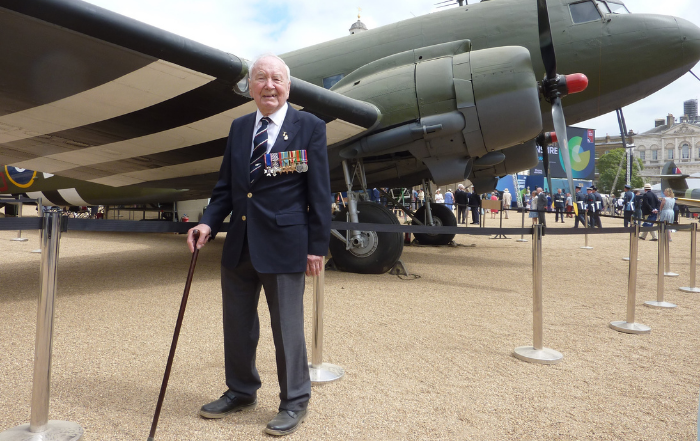 Doug Newham’s wartime career included two tours of duty and 60 operations serving as an air observer and navigator on Wellington and Halifax bombers in Europe and North Africa. His duties, for which he was awarded the Distinguished Flying Cross in September 1945, included targeting German industrial areas and U-boat ports, as well as participating in the invasion of Algeria and raids on targets in Sardinia, Sicily, Libya and Tunisia.  In 1944 he became Squadron Navigation Leader of 10 Squadron, at that time based at Melbourne near York.

Prior to joining the RAF in 1941, Doug was one of ‘the many’ whose wartime ground-based roles supported the Battle of Britain victory. Working as a civilian for the Post Office Engineering Research Station – a government communication research and development facility – Doug contributed to installing and upgrading the early warning radar network. Part of his job was to travel to radar stations around the UK – vital in the control of Fighter Command during the Battle of Britain – to carry out repairs after bombing raids.

During an interview with the RAF Association in 2020, Doug recalled seeing a German Ju 87 ‘dive-bomber’ overhead one day as he worked at a Kent radar station. He said:

“I was a very young man at the time, and, while the experience of being dive-bombed at close quarters was certainly a unique experience for me, I had to carry on with my work. Most of the radar stations were bombed repeatedly, and many WAAF radar operators lost their lives.”

Doug Newham was also a member of the Air Raid Precaution organisation, helping to counter some of the effects of Blitz air raids on local communities.

After the end of the war, Doug served on RAF Dakota transport aircraft in India and Burma ferrying POWs who had been released from Japanese camps and dropping food supplies to remote mountain villages before beginning a 35-year civilian career with BOAC, which became British Airways.

As a senior operations manager for the airline, Doug oversaw many of the company’s flight planning and crew scheduling functions as well as its overseas bases and he served on several technical committees which created the standards and procedures that contributed to the development of commercial air traffic across the Atlantic. He witnessed the introduction of the Boeing 747 ‘Jumbo Jet’ and Concorde in the 1970s. His responsibilities included planning flights for the British Royal Family – work that was acknowledged by HM The Queen when she made Doug a Lieutenant of the Royal Victorian Order in the 1969 New Year’s Honours List.

In their retirement, Doug Newham and his late wife, Julienne, retired to Cumbria. In recent years Doug was president of the RAF Association’s Cockermouth Branch.

In September 2020, Doug joined celebrities, serving RAF personnel and veterans to launch the Association’s Greatest Salute campaign, helping to mark the 80th anniversary of the end of the Battle of Britain.

Doug went on to speak on behalf of the Association at local, regional and national events, and he was interviewed on national television as part of the BBC’s 2020 Remembrance coverage.

“Doug was an inspirational individual who gave so much of his time helping others. He was exceptionally proud of being a member of Bomber Command and listening to him talk about his incredible experiences at the 85th Anniversary dinner held at the International Bomber Command Centre was an amazing privilege.”

George Page, the Chairman of the RAF Association’s Cockermouth branch, said Doug had been a very active member of the branch’s committee who, among many other things, had encouraged a generation of Cumbrian Air Cadets through his regular talks to them.

“All of us at the branch considered Doug to be one of the most remarkable people we had ever had the privilege of knowing. Nothing was ever too much trouble for him.  We shall not see the likes of him again.”

A service to celebrate Doug’s life is being held at 1pm today at St Kentigern’s Church, Caldbeck you can join the virtual service via the video link below.

The RAF Association offers a variety of ways to leave a legacy either for yourself as a gift in will or with a gift in memory to remember someone dear to you. Click the links below to find out more.

Gift in Will
Gift in Memory