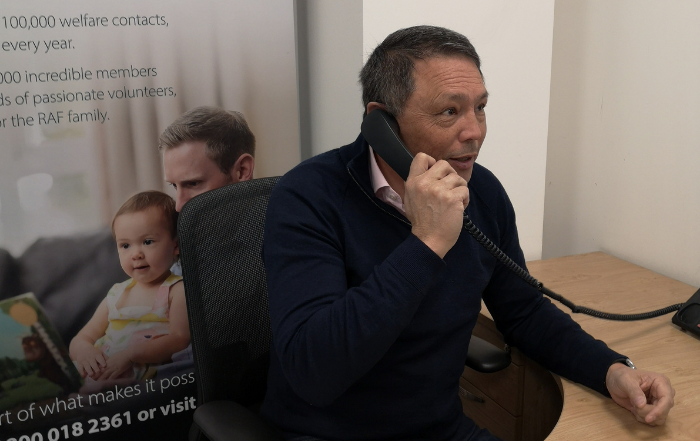 Celebrities, serving RAF personnel and Second World War veterans joined staff, volunteers and branch members from the RAF Association for Founders’ Day on Friday as the charity made wellbeing calls to 5,000 veterans, widows and widowers as part of its national outreach campaign – the biggest project of its kind by a UK military charity.

Former England Rugby player and ex-RAF pilot Rory Underwood (pictured above) and Grammy-nominated music conductor Anthony Inglis were among those who hit the phones for Founders Day from the headquarters of the Royal Air Forces Association in Leicester. The duo were joined by more than 150 other volunteers nationwide including pilots from the Royal Air Force Aerobatic Team, the Red Arrows and Bath rugby star and RAF weapons technician, Corporal Josh McNally.

The campaign aims to ensure that older members of the RAF community who gave their all for their country, get the support they need and deserve. Veterans are less likely than those without military backgrounds to seek support, so the RAF Association took this vital pro-active approach to connect with those who might need support as it marked Founders’ Day, the anniversary of the formation of the RAF on 1 April.

It is hoped the project will enable the RAF Association to direct thousands of RAF veterans and their dependants to its welfare support services including the RAF Association’s Connections for Life telephone friendship service, caseworker support and Finding it Tough mental wellbeing courses.

“As a former RAF fast-jet pilot, I’m thrilled to be supporting the RAF Association’s work by making telephone calls to older veterans. The people I have been speaking to gave their all for our country, they deserve to be asked, in their later years, how the charity can help them.”

Anthony Inglis, whose son is currently serving as a Chinook pilot in the RAF, added:

“My family connections with the RAF define who I am today. It is therefore of enormous pleasure to me that, although I have never served, I can in some small way, contribute something back to the service my whole family adored.”

“Unfortunately, we know that it’s not just during times of national emergency when vulnerable members of the RAF community need our help which is why this project is so important. Sometimes a simple phone can be the difference between someone continuing to struggle alone or getting the help and support they need.

“We are dedicated to our mission of achieving an RAF community that is connected, empowered and resilient, but we can only achieve this if we do our utmost to reach those who may need our help.”

The 2022 outreach campaign builds on the work the charity and its members began when the UK entered its first lockdown in 2020.

Since the start of the COVID-19 pandemic the Association has made over 250,000 friendship calls to help isolated individuals within the RAF community and launched the RAF Association’s Connections for Life service, designed to ease loneliness among older members of the RAF community by building friendships between volunteers and isolated individuals. The service now has 1800 beneficiaries who rely on regular phone calls delivered by 750 volunteers.

The RAF Association is looking for more volunteers to help meet the rising demand for its telephone friendship service. Information about becoming an RAF Association Connections for Life volunteer can be found by clicking the button below.