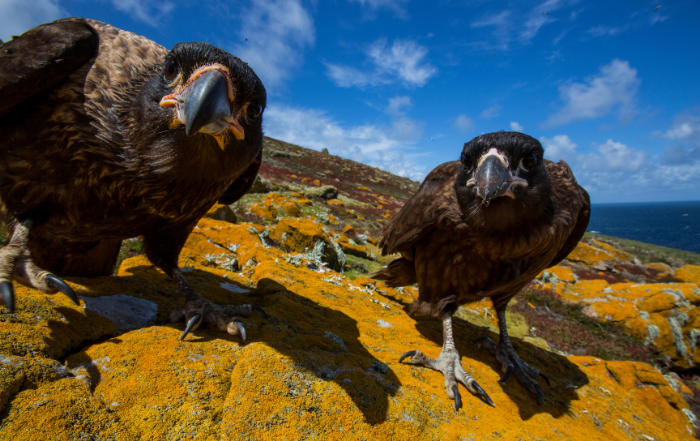 Former British Navy and RAF pilot David Morgan DSC was the most successful British fighter pilot of the Falklands War, and the last to be involved in a dogfight. Here he writes about his return to the Falklands, their wildlife – and his reconciliation with an erstwhile adversary.

“In March 2019 I was asked whether I would be able to travel to the Falklands; an unusual request made even more interesting by the fact that it came from a retired Fuerza Aérea Argentina pilot.

“Hector Sanchez and I first encountered each other on a very dark evening in 1982 at extremely low level, near Lively Island, some 60 miles southwest of Stanley. His formation of four A4 Skyhawks was attacking one of HMS Fearless’ landing craft when my wingman and I appeared on the scene. Hector was the only Argentine to get home. 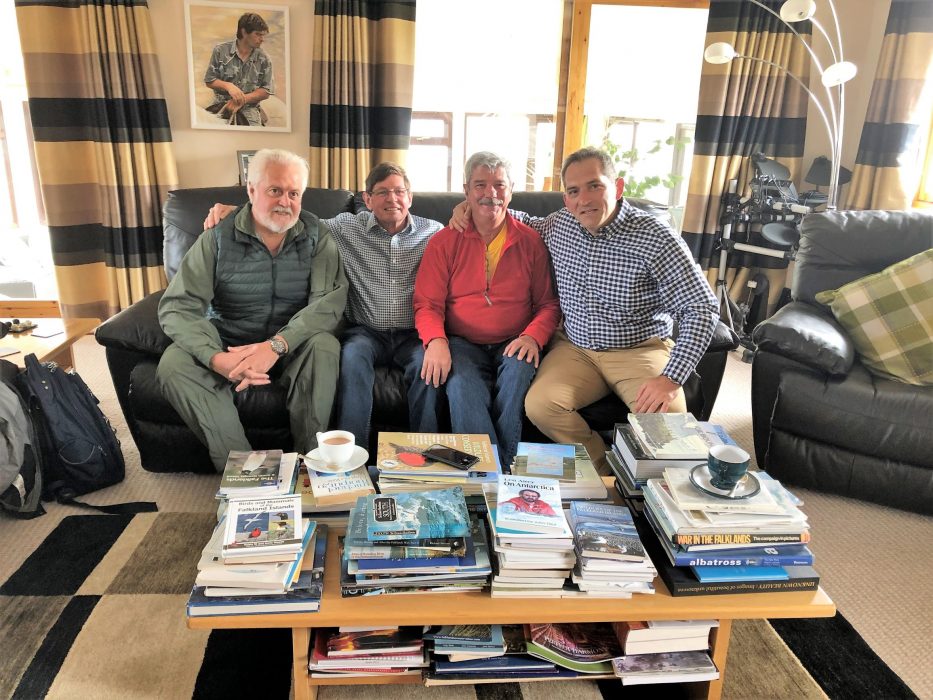 “The plan was for my wife and me to fly down on the airbridge from RAF Brize Norton (not a trip for the fainthearted!) and meet Hector in Stanley. His party included Luis Cervera (another A4 pilot) and Pablo Bolzán whose father had been killed on 8 June 1982 by my wingman’s Sidewinder after I had emptied my guns at him. We planned to visit the crash site and erect a small memorial, as well as trying to find the wreckage of a Dagger on the Falklands Lively Island that had been flown by Hector’s best friend, José Ardiles.

“There had been little time to appreciate the wildlife of the Falklands during my first visit in 1982. Indeed, the only contact I had with the local avian population was trying to avoid hitting Albatrosses and watching the Sheathbills perching unconcernedly on the lip of HMS Hermes’ ski-jump whilst a formation of Sea Harriers waited impatiently (and noisily!) to get airborne. This time however, I resolved to make more of an effort to explore the  Falklands and their indigenous fauna.

“On our first day in Stanley, we met up with Hector and Luis and walked out to Stanley airfield. This has changed little since the war and the control tower still bears scars from my cluster bombs. It is also possible to see the mostly now-filled craters of Black Buck 1’s 1000lb bombs, as they march from the edge of the runway up over Canopus Hill. From the tower we could see elegant Black-browed Albatross patrolling the shoreline and the inner harbour.

“The following day was very special; Caro and I were driven to the Volunteer Point reserve to visit the penguin colonies. The journey was a ninety-minute drive over stone tracks, followed by another two hours of extreme off-road excursion. We travelled in convoy across a vast landscape of bog and tussac grass under wonderful blue skies until, cresting a hill, we saw the rookeries. They are on a spit of land between a beautiful white-sand beach and a lagoon and contain thousands of chattering (and very smelly) birds which seemed completely oblivious to our presence. The three common types of local Falklands penguin were all in evidence; the beautiful and aloof King penguins, slightly smaller Gentoos and finally the burrowing Magellanic.

“Many of the Kings were brooding eggs on their upturned feet (no low flying allowed!) and a number of chicks had already hatched. In addition, there were many extremely tame Upland Geese. These totally wild birds have no fear of humans at all and will happily peck your shoelaces in search of a treat. Surprisingly on this particular day, the wind had dropped below the usual 20 knots and we were able to enjoy a picnic in the dunes overlooking the perfect white sand and azure-blue sea. Were it not for the penguins waddling past and the odd Two-banded Plover skittering through the sea cabbage, it could have been the Caribbean (on a cool day!).

“The following day, I abandoned Caro to the fleshpots of Port Stanley and joined Hector and his compatriots on another eight-hour boggy safari to visit the wreckage of Danilo Bolzán’s Skyhawk on Hammond Point. His son was accompanied by a dozen of his friends and together we built a small cairn and placed a simple memorial. It was quite an emotional few hours, but I was able to explain to both Hector and Pablo the exact details of our fight and show them the evidence of a Sidewinder warhead on the tail plane and fuselage. There was no doubt that the aircraft had been hit at very low level and exploded in mid-air. As we were working around the largest piece of wreckage, I realised that there was a pair of Tussac Birds using it for shelter, which somehow seemed very appropriate. They were very happy hopping amongst us and feasting on the massive crop of diddle-dee berries. 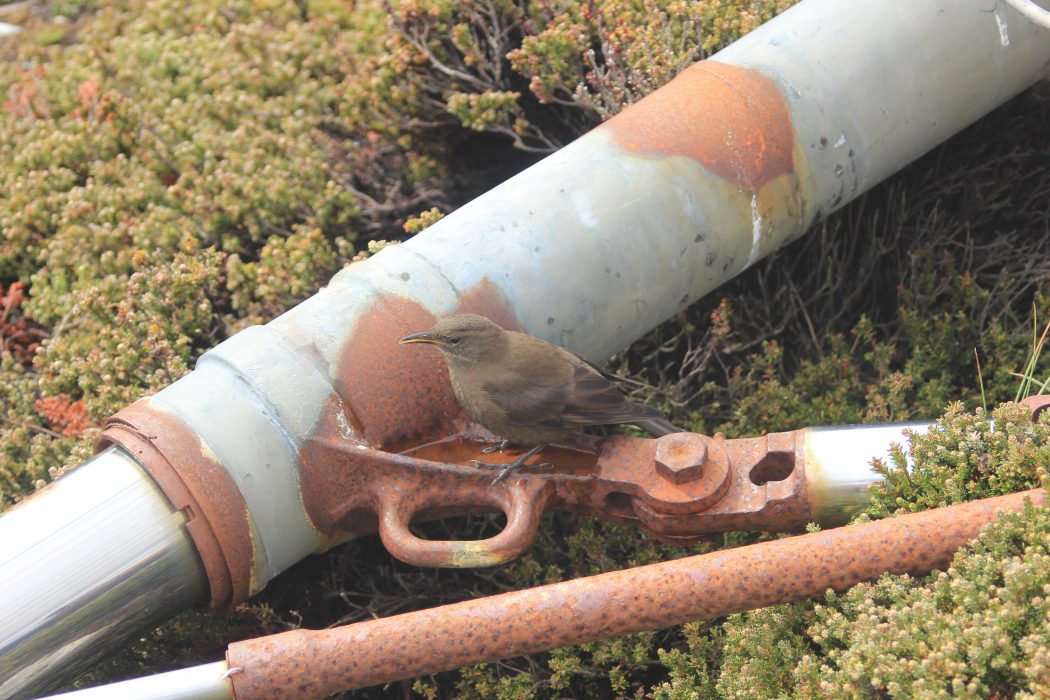 “Day three saw us driving around the north of East Falkland, past Teal Inlet to Port San Carlos. This is where the Harrier Forward Operating Base was established in May ’82 and my first reaction when I saw it again was “Bloody hell, that’s small!” And small it was – only 650 feet (198 metres) in length; enough to get airborne with a full weapon load and internal fuel. HMS Sheathbill (or Sid’s Strip if you were RAF) made a huge difference to our available CAP time [combat air patrol], increasing it from five minutes per transit from the ship to more than an hour. It was here that we had problems with the local wildlife in ’82, as the Upland Geese discovered that the tin strip was lovely and warm and a good place to sit. The judicious use of size 10 boots didn’t offer a lasting remedy, so a number were ‘liberated’ and became the Goose Galtieri main course at the Wardroom Victory Dinner.

“Our next destination was the Falklands British Cemetery in San Carlos. This is a beautifully peaceful and well-kept site, not at all mournful. Having found a few friends on the list of those who have no grave, I spied a stunning Long-tailed Meadowlark, but it refused to be photographed! I did, however, capture a good shot of a Dark-faced Ground-tyrant perching on the cemetery wall before we headed for Goose Green to pay our respects to Lieutenant Nick Taylor, who was shot down on 4 May.

“Our penultimate day in the Falklands was spent exploring the battlefields to the west of Stanley and gaining an appreciation of just what an amazing feat of arms the battles for Mount Longdon, Tumbledown and Wireless Ridge were. There is little left of the detritus of war; just the odd rusting gun and cluster bomb casing and most of the minefields have now been cleared. This has apparently reduced the pickings for the Striated Caracaras that scavenge ceaselessly in the mountains and uplands.

“And then came the long and slightly melancholic journey home. The wild – but amazingly tame beauty of the islands has left a lasting impression on both of us and I feel that I can now close the door on that part of my life. It was wonderful to be able to appreciate, at last, the wildlife and to realise that those of us who went south in ’82 have enabled the islands to flourish and grow in a way that probably would not have happened without the Task Force.”

This article first appeared in the RAF Ornithological Society Newsletter, and was reproduced in Air Mail magazine and here by kind permission of RAFOS and the author.

These RAF stories are just a selection of those which appeared in Air Mail magazine during 2021. To receive Air Mail, which is the RAF Association’s quarterly members’ magazine, become a member  and opt for Air Mail as part of your membership.