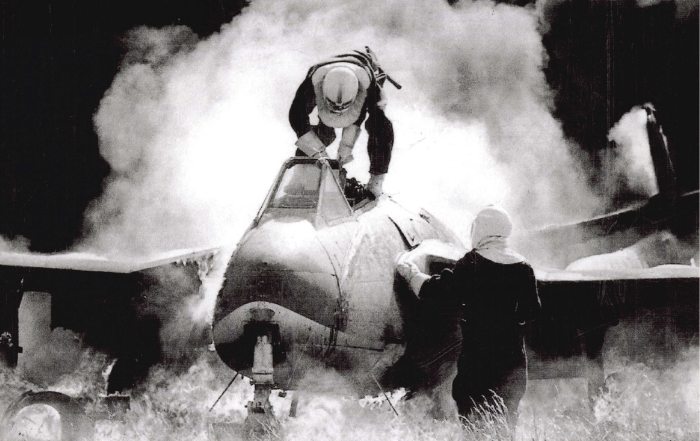 Ray Brasier saw distressing air crashes and mid-air collisions during his 23 years as an RAF crash rescue firefighter, a truly noble job. Now living alone in Chelmsford, confined to a wheelchair with his memories, post-traumatic stress disorder and dementia, 82 year-old Ray has been extremely grateful to the RAF Association Connections for Life scheme.

Ray’s father was serving on flying boats when Ray was born in the Royal Naval Hospital at Haslar near Portsmouth. As a teenager he worked on an RAF-run farm at Cranwell where his dad was then stationed. When he was 17 he joined the RAF as a crash rescue firefighter – his first posting after training was Cranwell.

Ray kept meticulous records of the incidents that he was involved in. On some occasions serious accidents resulted in scarcely any injury but all too many air accidents resulted in a terrible told of life. He has written a book titled ‘Safety from the Flames – Tales of an RAF Fireman 1955-1978’, arguing that people did not usually write about the unsung heroes of the military fire services.

Ray was awarded an MBE for his part in rescuing a stewardess from the Britannia in Cyprus. He was later made an OBE for his long service in the RAF’s rescue teams. While serving in Aden, he was awarded a local gallantry medal after tackling a fire in an old warehouse of the Khormaksar base. After he left the RAF in 1978, he worked for an insurance company.

Ray and Freda were married for 56 years before Freda died in 2015. Ray has been left with both physical and emotional scars from his service. However his health issues started to have more of an impact on his life three or four years ago. It was his doctor who contacted the RAF Association to see if it could make life easier for Ray, which is how Teresa came into his life. 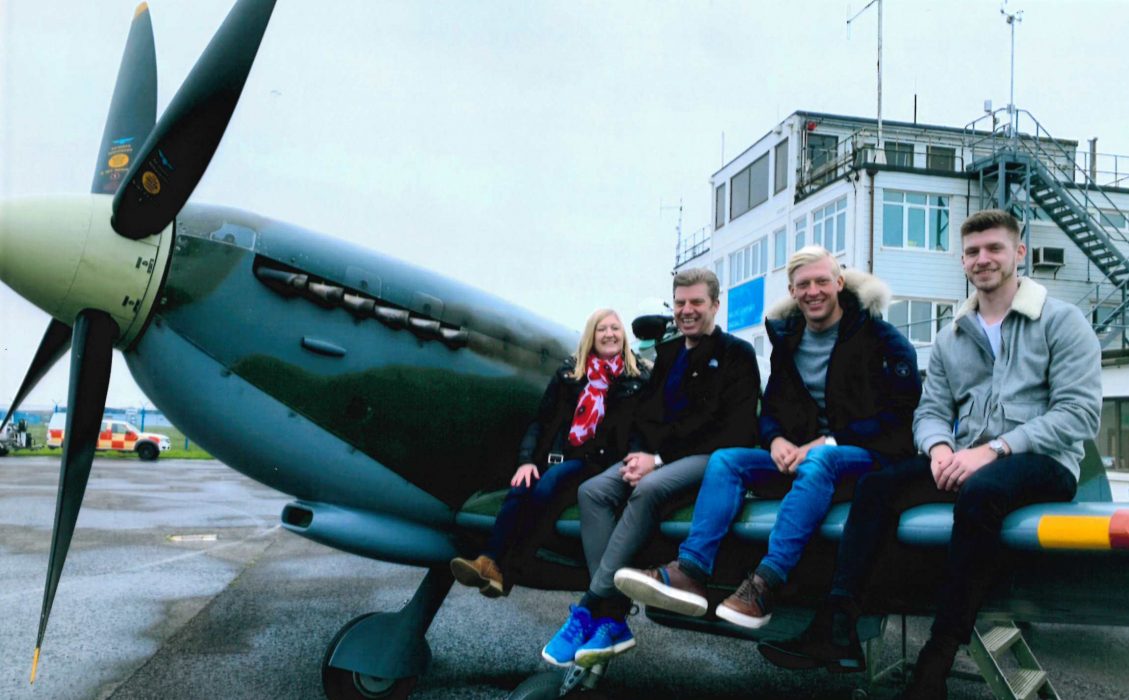 Teresa, her husband and sons after a Spitfire flying experience day

Teresa Stevenson joined the Association in 2019 after seeing a poster in a supermarket asking for people who could get in touch with isolated RAF veterans. Three years earlier she had left her career as a microbiology lab assistant for the National Health Service to move to the United States with her husband. When they returned, her former laboratory had been privatized. Teresa started looking for flexible volunteering that would work around her husband’s new job (he usually commutes weekly from Essex to Cologne). She did some research on the Association website and thought:

“that’s me all over”

Teresa is in her early 50s and was originally from Burry Port in South Wales. She, her husband and her eldest son had been involved with the RAF Air Cadets as cadets, instructors and fundraisers. She put in her application immediately to become a volunteer.

As well as Ray, Teresa also supports Joyce, a 92-year-old former member of the WRAF who also lives nearby. She has regular calls with six other RAF veterans across the UK.

This is an unusual amount of volunteering to take on, a noble job in itself but she says:

“From my perspective, it’s been a godsend since the pandemic started last year. I have gained knowledge and confidence, and it also kept me going as I have been kept busy and feel I am doing something worthwhile. The oldest of my six beneficiaries is 97. It’s been an absolute pleasure learning about their live and, more importantly, building trust and companionship.”

Before the COVID-19 crisis, Teresa visited Ray and Joyce once a fortnight. During lockdown she phoned them at least once a week, while also making calls to her newer beneficiaries.

Although Ray has been supplied with an alcove phone, which has a video screen and makes it easier for him to hear, Teresa says:

“I am longing for face-to-face visits again. We have a lot of laughs as we both have the same sense of humour. We used to have jolly jaunts into town with his electric wheelchair for a coffee, or occasionally lunch. We would pass a river and always check on a family of swans that nest there every year.”

“I absolutely enjoy it – it’s the best thing for me”, she continues. “Ray has ambitions to go to the Imperial War Museum at Duxford and I hope that, once the coronavirus crisis is over, I can help with that”.

Talking about Teresa’s support for him, Ray says: “It has proved to be a beautiful partnership – she helps me no end. Nothing is too much for her. I do not see many people and feel quite isolated. I am very grateful to her and the RAF Association which has been absolutely, unbelievably good”.

A noble job was first published in Air Mail’s July 2021 issue. For more articles like this, sign up for membership and include Air Mail magazine, the official magazine of the Royal Air Forces Association, in your subscription.

Featured image: Ray Brasier on top of an aircraft during a real-life rescue

The Association always has space for any member of the RAF community who would benefit from the Connections for Life service.  Also, we are looking for people who can help make support calls – as some of our current volunteers go back to work as lockdown eases.